People who are visiting or working in commercial and public buildings mostly do not think about structural security designed in the building. As a matter of fact, many people aren’t even familiar with the term “metal exit device.” Despite the fact that every commercial and public building in North America is likely outfitted with numerous exit devices (also often called crash bars or panic bars). On the other hand, everybody who enters a public building has a reasonable expectation of security and safety while in the building. Luckily, exit devices play a huge role in the safety and security of human lives in addition to the property. 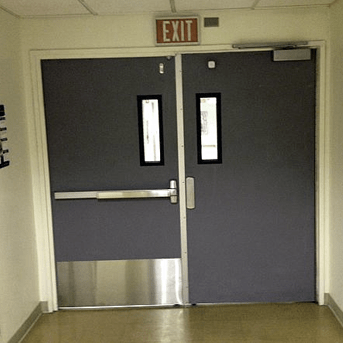 An exit device is a form of door hardware that allows the door to remain locked from the outside, however, people inside can still exit quickly without having to unlock the door. This mechanism basically makes a hands-free exit possible. Actually, the name “crash bar” comes from the ability to open the door by simply applying full-body force to it or “crashing” into it.

Exit metal doors are effective for a several reasons. First and foremost they are a security and safety feature in itself. A building owner who wishes to limit the public’s ability to enter a structure to just a few select entrances can apply crash bars to all non-public doors. These doors cannot be opened from the outside when locked. In case of an emergency, such as a fire, those inside the building can use these doors as emergency exits by pushing the crash bar on the inside of the door. The term “panic bar” came to be applied to exit devices because they can be opened quickly in a panic situation. Panic bars are also advantageous because people with limited mobility and even small children can operate them.

The first crash bar was invented in the early 1900’s and sold under the brand name Von Duprin. They continues to be the leading manufacturer of exit devices, though other companies have since copied Von Duprin’s original design. Von Duprin has kept ahead by improving on its original design since its first prototype. New technology has allowed for lighter and stronger materials to be used and all of this has resulted in a wide range of quality exit devices in the market today.

There are 3 basic types of exit devices available

Rim style: This type is mounted on the inside surface of the door.

Mortise style: Like standard a mortise lock, this type of crash bar has its locking mechanism mounted into a cavity inside the door.

Surface/Concealed style: This type is constructed with vertical rods. Concealed exit devices provide additional latching at the tops and/or bottoms of doors. This type of exit device is used when aesthetics play a strong factor in door design.

Crash bars are available in various designs, however, most people are familiar with the touchbar design. These are usually found on utility, service and emergency exit doors. The crossbar style is also quite popular, actually, first Von Duprin exit device was a crossbar type. Other styles include lever and plate-type.

Today all industrialized countries have some type of standard building code which dictates how an exit device should be applied to commercial and/or public buildings. Without a doubt many lives have been saved because of panic bars since their invention over one hundred years ago. This inconspicuous and seemingly insignificant device has transformed the face of building safety and public security in a very substantial way.

Advanced Security Safe and Lock offers a wide selection of exit doors for your home or business and offer free estimates and evaluations.

What Our Customers are Saying